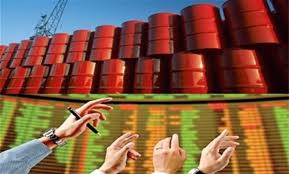 By Alex Longley and Javier Blas
(Bloomberg) — The $3.8 billion U.S. Oil Fund, which
accounts for nearly 25% of all outstanding contracts in the
most-traded West Texas Intermediate crude futures, said it will
alter some of its position, citing market and regulatory
conditions.
The exchange-traded fund, which normally holds WTI futures
for the nearest month, will now move 20% of its contracts to the
second-traded month. The change takes effect today and will be
in place until further notice, it said in a filing with the U.S.
Securities and Exchange Commission.
The shift, announced late on Thursday, coincided with sharp
movements in the price relationship between the June and July
WTI contracts, traders said.
“As a result of these changes, USO may not be able to meet
its investment objective,” according to the filing.
As of Thursday the fund held almost 150,000 June Nymex WTI
contracts, which is more than a quarter of the total
outstanding. It has received more than a billion dollars worth
of inflows so far this week as WTI prices have plummeted below
$20 a barrel.
Though low prices are attractive to many investors, they
come at a cost. The nearest WTI contracts are trading more than
$7 a barrel below the subsequent month. That means that
investors face a 30% hit to keep the same position as futures
contracts roll from one month to the next.
WTI’s June contract discount to July deepened 71 cents to
$4.73 by 8:15 a.m. in New York on Friday. The move will see
selling of June contracts and buying of July ones, which could
widen the spread further.
14 комментариев
какая антиреклама  U.S. Oil  !